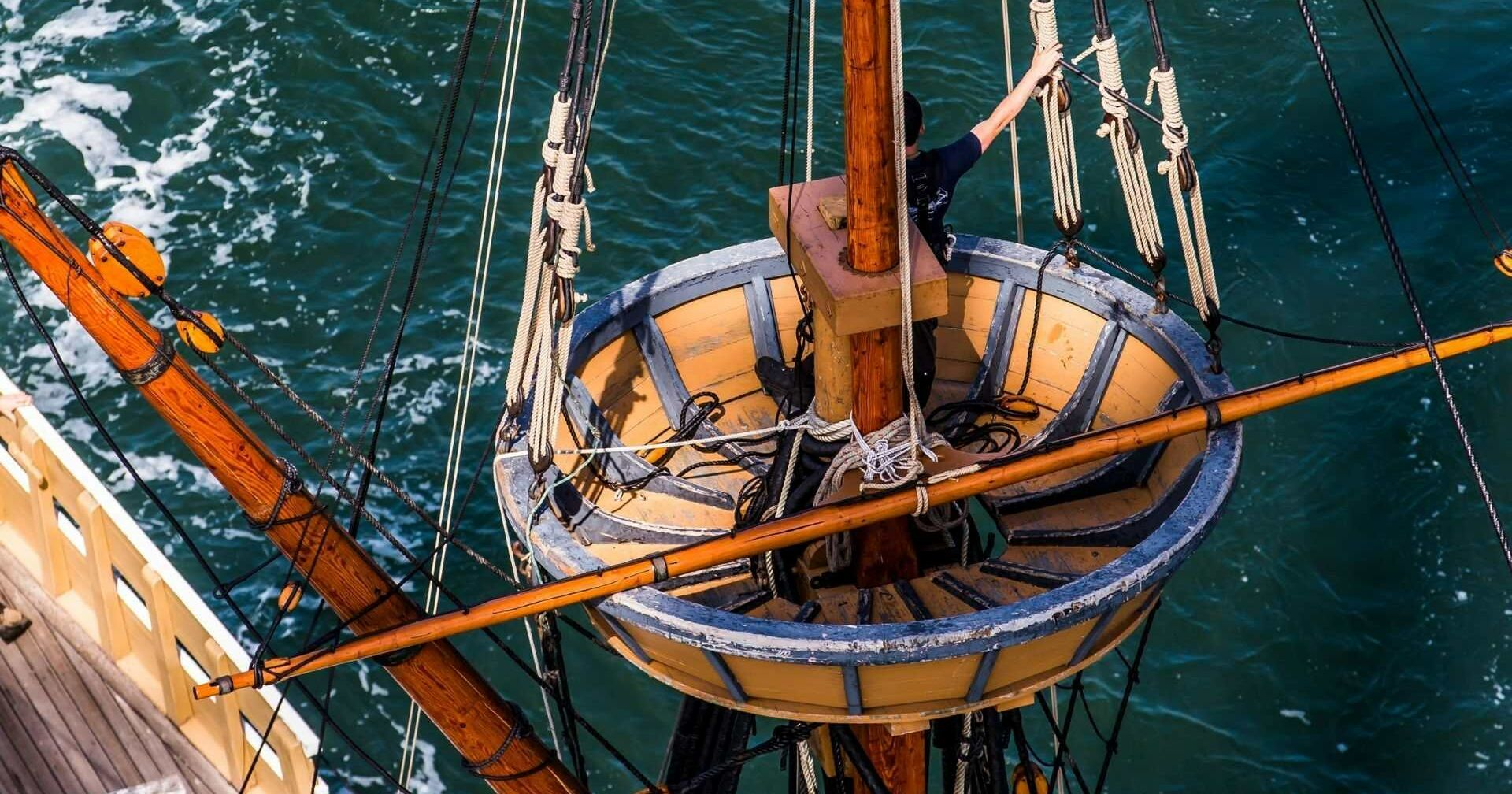 Along with national treasures such as the Statue of Liberty and the Lincoln Memorial, Mayflower is an iconic symbol of freedom. Of the hundreds of ships that made the transatlantic crossing in the 1600s, she is the ship we remember. Three hundred years later, on June 13, 1957, a full-scale reproduction arrived in Plymouth Harbor, Mayflower II.

Since then, Mayflower II has become the majestic centerpiece of historic Plymouth Harbor, and the Commonwealth of Massachusetts. In many ways, America is the product of the events that happened in Plymouth and Native Patuxet four centuries ago—the choices made, risks taken, and the adaptation of community structures to new civic realities. Mayflower II tangibly embodies those choices and risks for hundreds of thousands of lifelong learners each year. More than twenty-five million people have stepped aboard her decks to imagine the perils and contemplate the modern impacts of the historic crossing.

Today, Mayflower II is a floating classroom and working vessel. Following her restoration and return to Plymouth in 2020, she was added to the National Register of Historic Places, illuminating that she is a historic ship in her own right.

“Mayflower II is a source of inspiration to those in search of new beginnings and the possibility of multicultural cooperation in this nation of immigrants. Upon her return to Plymouth Harbor she once again became a kind of time machine…to a past that only gains in resonance and importance with each passing day.” — Nathaniel Philbrick

After 3+ years of restoration and 3 weeks of sea trials, on August 10, 2020 Mayflower II departed a slip at Mass Maritime Academy headed for home. With great fanfare and a flotilla along the way, the ship nestled back into her berth in Plymouth Harbor later that day.

Following her return, on October 22, 2020 Mayflower II was named to the National Register of Historic Places. She was deemed historically significant for her association with the founding story of the United States and as a full-scale ship that embodies the distinctive characteristics of a 17th-century English merchant vessel. In April 2021, Mayflower II received a Paul & Niki Tsongas Award from Preservation Massachusetts in recognition of the project’s significant work in historic ship restoration, and went on to win Preservation Massachusetts’s People Choice Award the following month.

[All photos in the below gallery are from Mayflower II’s August 2020 homecoming following her restoration.] 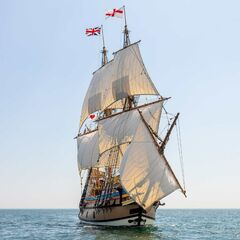 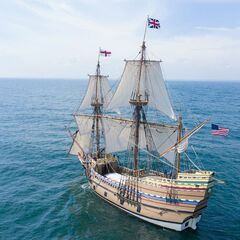 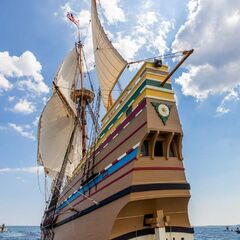 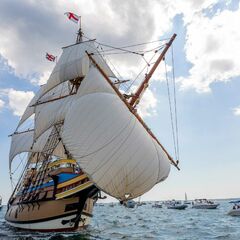 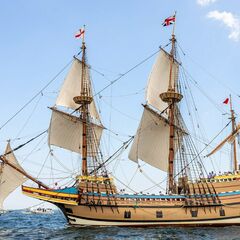 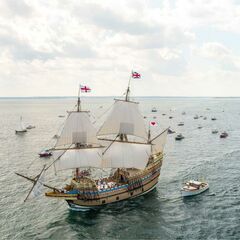 A reproduction ship was always part of Harry Hornblower’s vision for Plimoth Patuxet Museums (learn more about his vision here). In 1951 Plimoth Patuxet (then known as Plimoth Plantation) contracted naval architect, William A. Baker, to research and design plans for a ship the size and type of the original Mayflower. At nearly the same time, unbeknownst to Plimoth Patuxet, a similar project was developing in England. Warwick Charlton founded Project Mayflower Ltd. to honor the alliance of friendship forged between the United States and United Kingdom during World War II. Charlton’s team came across an article written by Baker, and after connecting with Plimoth Patuxet, a new partnership was born. Plimoth Patuxet provided Baker’s research and plans to Project Mayflower Ltd. Of course, that is just the start of Mayflower II’s journey! 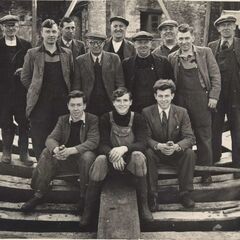 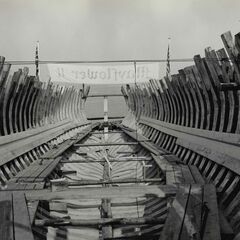 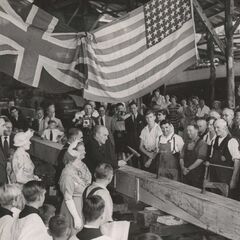 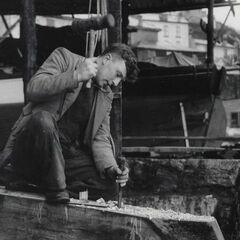 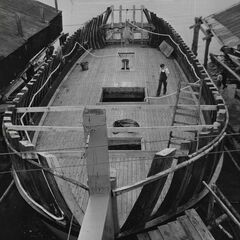 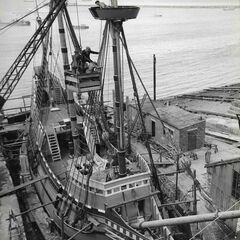 [Above Photo Captions: Photo 1: Generations of shipwrights on Mayflower II’s frame at the J.W. & A. Upham Shipyard; Photo 2: A shipwright works in the hull of Mayflower II. Note the “Mayflower” banner flown between a United States and United Kingdom flag; Photo 3. Shipwrights, community members, dignitaries, and project leaders gather for the keel laying ceremony in July 1955. Note the United Kingdom and American flags tied together above the bean in tribute to the friendship between the two countries the ship exemplified following World War II; Photo 4: A shipwright works on Mayflower II using traditional 17th-century methods and tools. Photo 5: View of Mayflower II’s Main deck and Beak; Photo 6: Mayflower II, nearing completion and being rigged by shipwrights in Brixham.]

Mayflower II set sail from Plymouth, England on April 20, 1957 with a crew of thirty-three men under the command of acclaimed captain Alan Villiers. As they neared Massachusetts shores, Mayflower II ran into a violent squall. No one aboard had experience with handling a 17th-century vessel in inclement weather. However, Captain Villiers remembered that William Bradford, famed Governor of Plymouth Colony and passenger aboard the original Mayflower during her 1620 voyage, wrote in his manuscript, Of Plimoth Plantation, how Master Christopher Jones steered the original ship to safety during the 1620 voyage by lying ahull. Quickly recalling this note, Villiers and the crew executed the same maneuvers and calmly rode out the storm. On June 13, 1957 Mayflower II arrived in Plymouth, Massachusetts to a crowd of 25,000 adoring spectators. 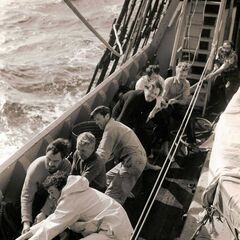 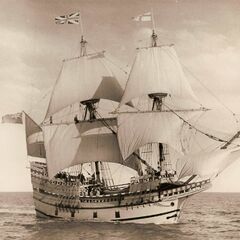 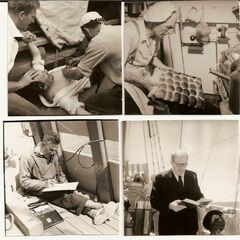 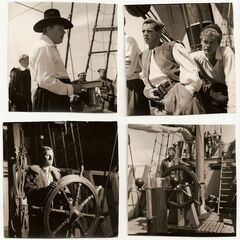 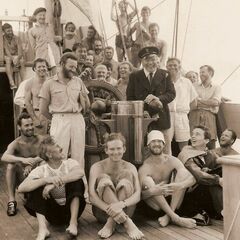 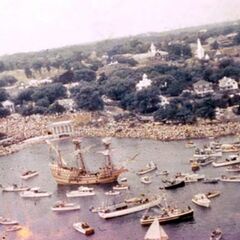 [Above Photo Captions: Photo 1: Stuart Upham, second from rear, hauls a line with fellow Mayflower II crew members in 1957; Photo 2: Mayflower II undersail in the Atlantic Ocean; Photo 3: A selection of images of the crew aboard Mayflower II during her 1957 maiden voyage. Top right, a batch of rolls fresh out of the oven in Mayflower II’s galley. Top left, crew members demonstrate 17th-century medical procedures with leeches while under sail. Bottom right, Captain Villiers delivers a Sunday service to the crew. Bottom left, a crew member sketches and paints; Photo 4: A selection of images from the 1957 voyage. Top right, crew members dressed in Pilgrim attire on the Main deck. Top left, Captain Villiers, in Pilgrim attire, addresses his crew on the Main deck. Bottom right, a crew member at the ship’s wheel during the day. Bottom left, a crew member at the ship’s wheel at night; Photo 5: The 1957 Mayflower II crew with Captain Villiers; Photo 6: Mayflower II arrives in Plymouth on June 13, 1957 and is greeted by thousands of spectators along the waterfront.]

Do you know everything there is to know about the history of Mayflower II? Test your wits with our trivia and pick up a new fact or two to impress your friends and family.

Is there a young historian in your family? Share the story of Mayflower II and give them the opportunity to see history in a new light while exploring their creative side.