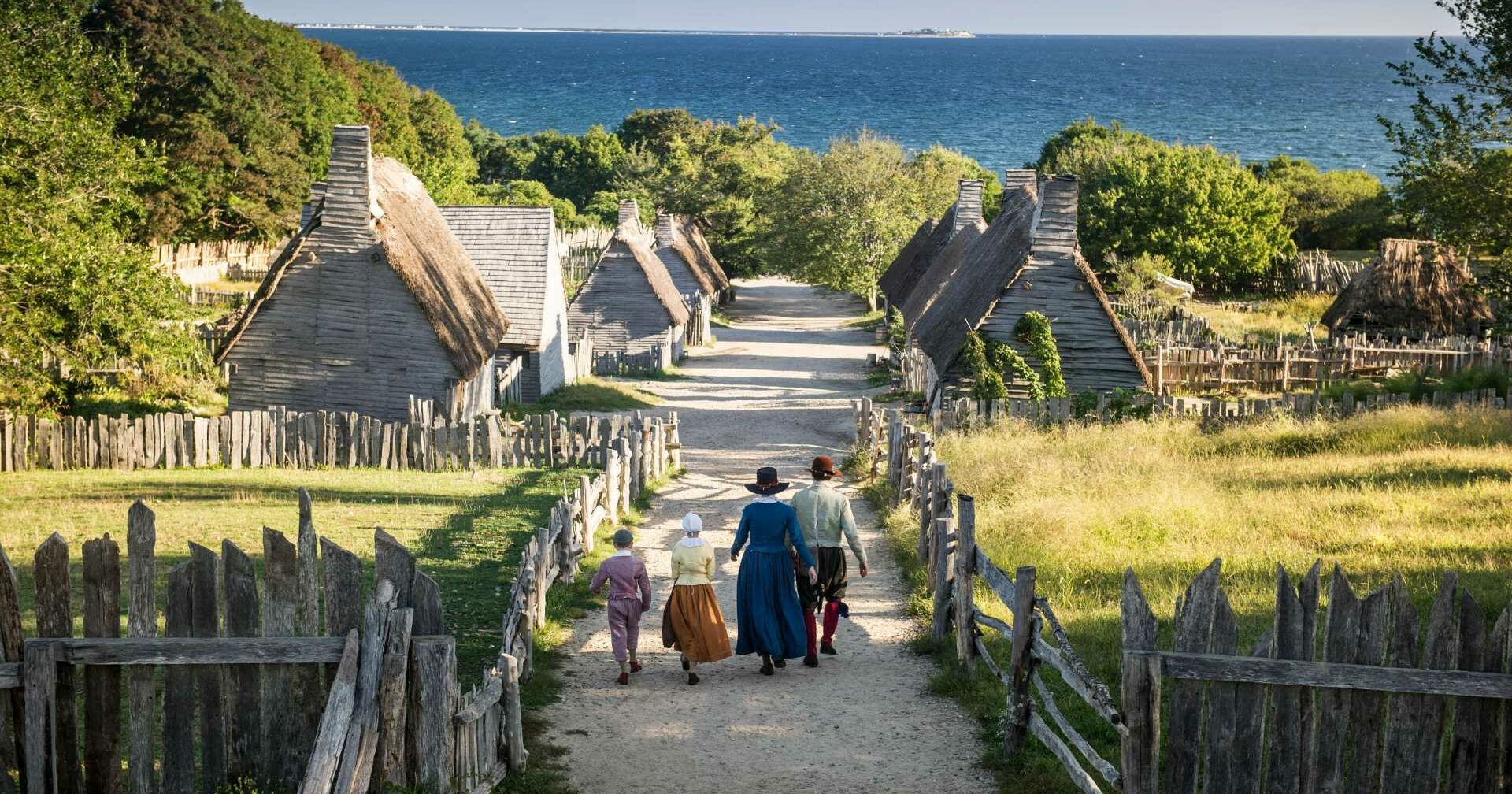 Who Were the Pilgrims?

The people we know as Pilgrims have become so surrounded by legend that we are tempted to forget that they were real people. Against great odds, they made the famous 1620 voyage aboard the ship Mayflower and founded Plymouth Colony, but they were also ordinary English men and women. To understand them, it is important that we look beyond the legend. This story will help you get to know these people, now known as the Pilgrims, through their first years in New England.

England was a Roman Catholic nation until 1534, when King Henry VIII (reigned 1509-1547) declared himself head of a new national church called the Church of England. Although he and his daughter, Queen Elizabeth I (reigned 1558-1603), changed some things that made the Church of England different from the Roman Catholic Church, a few people felt that the new Church retained too many practices of the Roman Church. They called for a return to a simpler faith and less structured forms of worship. In short, they wanted to return to worshipping in the way the early Christians had. Because these people wanted to purify the church, they came to be known as “Puritans.” Another group, considered very radical, went even further. They thought the new Church of England was beyond reform. Called “Separatists,” they demanded the formation of new, separate church congregations. This opinion was very dangerous; in England in the 1600s, it was illegal to be part of any church other than the Church of England.

The Separatist church congregation that established Plymouth Colony in New England was originally centered around the town of Scrooby in Nottinghamshire, England. Members included the young William Bradford and William Brewster. Like others who refused to follow the Church of England’s teachings, some of them were harassed, fined or even sent to jail. When they felt they could no longer suffer these difficulties in England, they chose to flee to the Dutch Netherlands. There, they could practice their own religion without fear of persecution from the English government or its church.

The Pilgrims in Holland (the Netherlands)

Although they had religious freedom, life in the Netherlands was not easy. The Separatists had to leave their homeland and friends to live in a foreign country without a clear idea of how they would support themselves. The congregation stayed briefly in Amsterdam and then moved to the city of Leiden. There they remained for the next 11 or 12 years. Most found work in the cloth trades, while others were carpenters, tailors and printers. Their lives required hard work. Even young children had to work. Some older children were tempted by the Dutch culture and left their families to become soldiers and sailors. Their parents feared that they would lose their identity as English people. To make matters worse, the congregation worried that another war might break out between the Dutch and Spanish. They decided to move again.

The Move to America

After careful thought, the congregation decided to leave Holland to establish a farming village in the northern part of the Virginia Colony. At that time, Virginia extended from Jamestown in the south to the mouth of the Hudson River in the north, so the Pilgrims planned to settle near present-day New York City. There they hoped to live under the English government, but they would worship in their own, separate church. Because their own money wasn’t enough to establish their village, they entered into an agreement with financial investors. The company of investors would provide passage for the colonists and supply them with tools, clothing and other supplies. The colonists in turn would work for the company, sending natural resources such as fish, timber and furs back to England. All assets, including the land and the Pilgrims’ houses, would belong to the company until the end of seven years when all of it would be divided among each of the investors and colonists. The colonists and investors had many disagreements, but eventually the Pilgrims were able to leave Europe for America.

The entire congregation could not come to America together. Those who could settle their affairs in Leiden went first while the greater number, including their pastor John Robinson, remained behind. The congregation purchased a small ship, Speedwell, to transport them across the sea and to use for fishing and trading in America. At Southampton, a port in England, they were joined by a group of English colonists who had been gathered by the investors. Speedwell and Mayflower – a ship rented by the investors – departed for America together. After twice turning back to England because Speedwell leaked, they were forced to leave the ship. As a result, many families were divided when some passengers had to be turned back for lack of space. A month after first leaving England, on September 6, 1620, Mayflower set out alone with 102 passengers.

Mayflower arrived in New England on November 11, 1620 after a voyage of 66 days. Although the Pilgrims had originally intended to settle near the Hudson River in New York, dangerous shoals and poor winds forced the ship to seek shelter at Cape Cod. Because it was so late in the year and travel around Cape Cod was proving difficult, the passengers decided not to sail further and to remain in New England. It was here, in Cape Cod Bay, that most of the adult men on the ship signed the document that we know as the Mayflower Compact. It laid the foundation for the community’s government.

A party of the most able men began exploring the area to find a suitable place to settle. After several weeks, the exploring party arrived at what appeared to be an abandoned Wampanoag community. The plentiful water supply, good harbor, cleared fields, and location on a hill made the area a favorable place for settlement.

Mayflower arrived in Plymouth Harbor on December 16, 1620 and the colonists began building their town. While houses were being built, the group continued to live on the ship. Many of the colonists fell ill. They were probably suffering from scurvy and pneumonia caused by a lack of shelter in the cold, wet weather. Although the Pilgrims were not starving, their sea-diet was very high in salt, which weakened their bodies on the long journey and during that first winter. As many as two or three people died each day during their first two months on land. Only 52 people survived the first year in Plymouth. When Mayflower left Plymouth on April 5, 1621, she was sailed back to England by only half of her crew.

Although they occasionally caught glimpses of Native People, it wasn’t until four months after their arrival that the colonists met and communicated with them. In March 1621, they made a treaty of mutual protection with the Pokanoket Wampanoag leader, Ousamequin (also known as Massasoit to the Pilgrims). The treaty had six points. Neither party would harm the other. If anything was stolen, it would be returned and the offending person returned to his own people for punishment. Both sides agreed to leave their weapons behind when meeting, and the two groups would serve as allies in times of war. Squanto, a Wampanoag man who had been taken captive by English sailors and lived for a time in London, came to live with the colonists and instructed them in growing Indian corn.

In the fall of 1621, the colonists marked their first harvest with a three-day celebration. Massasoit and 90 of his men joined the English for feasting and entertainment. In the 1800s this famous celebration became the basis for the story of the First Thanksgiving.

Over the next six years, more English colonists arrived and many of the people who had to stay behind in England or Holland when Mayflower left England were able to join their families. By 1627, Plymouth Colony was stable and comfortable. Harvests were good and families were growing. In 1627, about 160 people lived in Plymouth Colony.

A pilgrim is a person who goes on a long journey often with a religious or moral purpose, and especially to a foreign land. After the Mayflower arrived, the first baby born was a boy. His parents (William and Susannah White) named him Peregrine - a word which means travelling from far away and also means pilgrim. The writer of Mourt's Relation in 1622 refers to the Plymouth Colonists as pilgrims. Governor William Bradford calls the Plymouth settlers pilgrims when he writes about their departure from Leiden, Holland to come to America: “They knew they were pilgrims, and looked not much on those things, but lifted up their eyes to the heavens, their dearest country; and quieted their spirits.” Governor Bradford also wrote a poem in which he refers to himself as a pilgrim.

'Pilgrim' became (by the early 1800s at least) the popular term applied to all the Mayflower passengers - and even to other people arriving in Plymouth in those early years - so that the English people who settled Plymouth in the 1620s are generally called the Pilgrims.