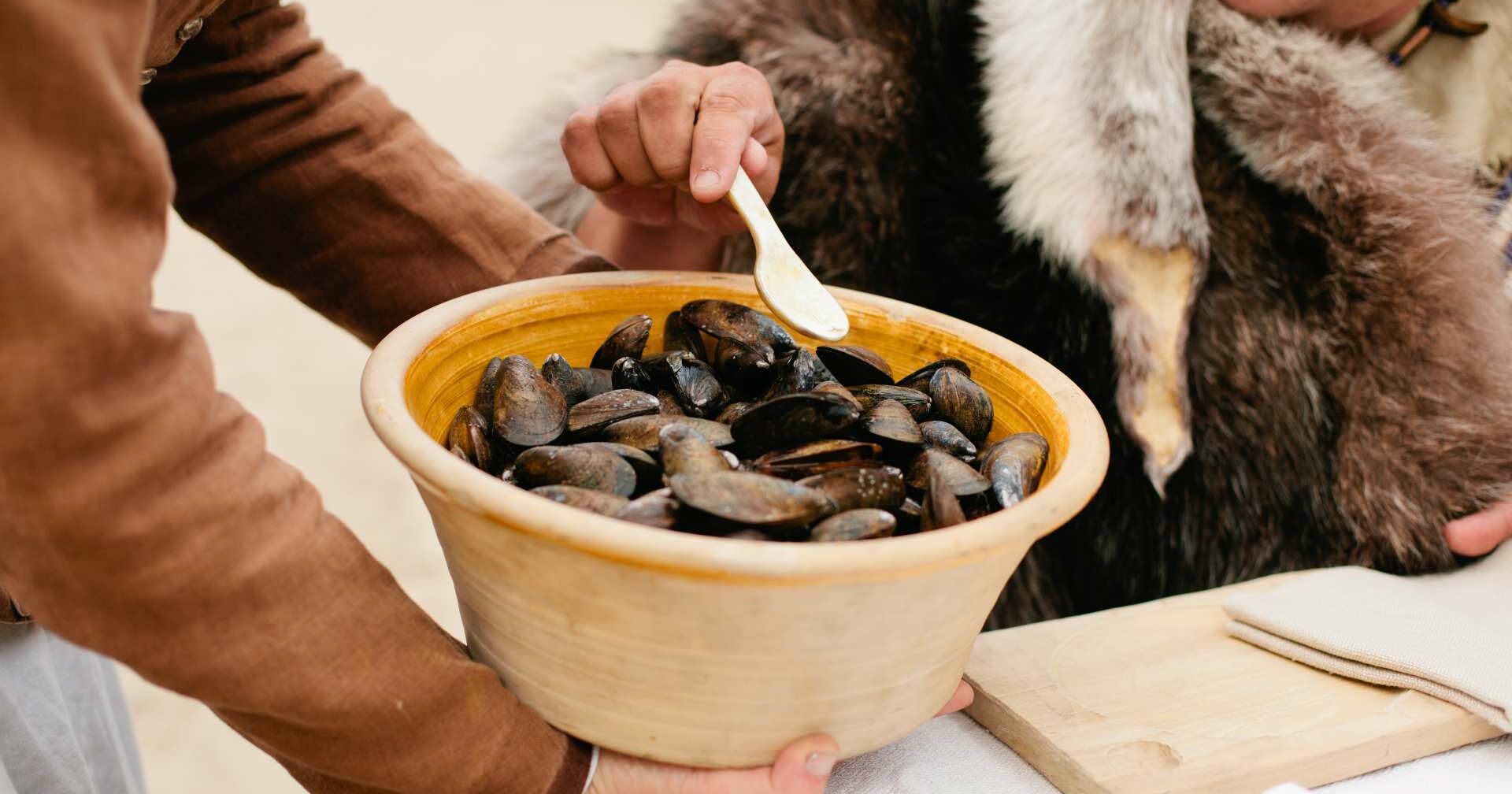 In the Wampanoag way of life, all Beings on Earth were given gratitude for their existence and for their gifts. All of the Nations of Animals, Winged Ones, Water Beings, even the tiny insects were considered to be gifts from Creator to the Humans. Everything had its purpose. All life was considered sacred, and treated that way. Foods not used were given back into Mother Earth. This was 17th-century recycling!

There were four ways the Wampanoag gathered food during the 1600s and before. These were hunting, fishing, harvesting wild plants and the planting of crops. The Wampanoag have been planting crops for about 1,200 years.

Many animals were hunted and eaten including deer, moose, beaver, rabbit, skunk, and raccoon. Whatever was hunted became not only food, but the whole animal was used for other things. Hides were used for clothing and materials for many things, the bones were used for tools, and the sinew for sewing.

The Wampanoag fished in the fresh-water ponds and rivers for herring, trout, perch, catfish and eels. They also fished in the saltwater ocean for cod, tautog, pollock, bluefish, flatfish, bass, sea eels, mackerel and others. The men even went out on whaling trips too! Women usually caught shellfish such as oysters, soft-shelled clams, quahogs, mussels, razor clams, lobsters, crabs, and conch.

Many different kinds of nuts, berries, greens, and mushrooms were gathered from the woods and other places. These were added to soups and other dishes such as nasaump , a thick and filling food made of corn. Some of these nuts and berries were eaten fresh, while others were dried and stored for future use.

The Wampanoag gave thanks for the many plant medicines that came from the Plant Nations. Different kinds of bark, leaves, blossoms and roots of plants were carefully harvested at certain times of the year. These were used as medicines for many different problems.

Planting began in the spring with the people making small hills of earth to cover herring they placed in the ground. These fish were put into a hole perhaps every other year to act as fertilizer for the growth of the seeds. At the proper time for each, seeds of corn, beans, squashes of many kinds, and melons were planted. The first harvest was that of the green corn around the middle of July.

When the Wampanoag obtained food, they would be sure to give thanks in ceremonial ways each time. In this way, no living thing was taken for granted. It also meant that there was less waste and misuse of what was collected from the natural world, our Mother Earth.

Gratefulness for all foods was important to the Wampanoag and still is today. Everything our People ate, drank, used and wore came from Mother Earth, given to us as gifts from the Creator. Do you think this is the same today? Trace back what you eat, drink, use and wear to their basic, natural ingredients and you may be surprised!

How would you like to live in a time when children drank beer but didn't drink milk? A time when deer and swan were considered delicacies and lobster was everyday food? Welcome to England and New England in the 1600s!

Though the English from this time ate some of the same foods that we do today, their diet was quite different from ours. In fact, people back then had a very different idea of what foods were good for them. To their minds, bread, beer and meat were the best foods, although they couldn't often have them in New Plymouth.

In the 1600s everyone ate according to the season. Back then many foods were available only at certain times of the year. No matter how much money you had, there were some foods that you just couldn't have. Without refrigeration and the fast shipping that we have today, foods couldn't be brought in from other parts of the world before they spoiled. So, it was impossible to have fresh strawberries in December.

After the colonists first arrived in Plymouth, they had three really difficult years. There were no food shops in New England, so the colonists had to produce their own food. They struggled to grow crops in a climate that was different from England. Fishing was difficult because most of the colonists weren't trained as fisherman and they brought the wrong sized fish hooks! Supplies from England didn't come as frequently as they wished, so whole years went by without any imported goods like sugar and butter.

Things did improve, though. The colonists got better at fishing. They began to grow more Indian corn, which they learned to cultivate from the Wampanoag People. And they learned the best ways to hunt and trap animals such as deer, rabbit, turkey, geese, duck, and other wildfowl. The domesticated animals that they brought from England -- chickens, goats, sheep and cows -- were increasing in number and were able to be eaten. And supplies such as sugar, spices, oil, vinegar and wine began to be sent over on ships yearly. Some colonists wrote letters back to friends and family saying how good their diet had become -- better than when they lived in England or Holland.

The one thing they still missed, though, was beer. In England, beer was the preferred drink for the whole family, even children. Though it is possible that some families in Plymouth brewed a small amount of beer from barley, most families had to make do with drinking water. Oddly enough, water was considered downright unhealthy to drink! Some colonists were surprised that their children were so healthy when they drank water instead of beer. Milk was not considered very good to drink either. It was usually made into butter or cheese, or cooked with to make tasty grain porridges.

Just like us today, the Pilgrims usually ate three meals a day. But how they ate these meals is a little different. Many people would “break fast” in the morning with a little bread and butter, or cheese, or something left from the day before. In the middle of the day, everyone ate dinner, which was a largest meal of the day made up of several foods. There was probably a thick porridge or bread made from Indian corn and some kind of meat, fowl or fish. Supper was a smaller meal, often just leftovers from dinner.

The Plymouth colonists thought a lot about food. Most of the work that they did -- hunting, fishing, farming, gardening, cooking, and taking care of their animals -- had to do with getting food on their tables. They had to plan carefully to make certain that they had enough food for the whole year, and try not to waste anything. They couldn't just order a hamburger or pizza like we do today!