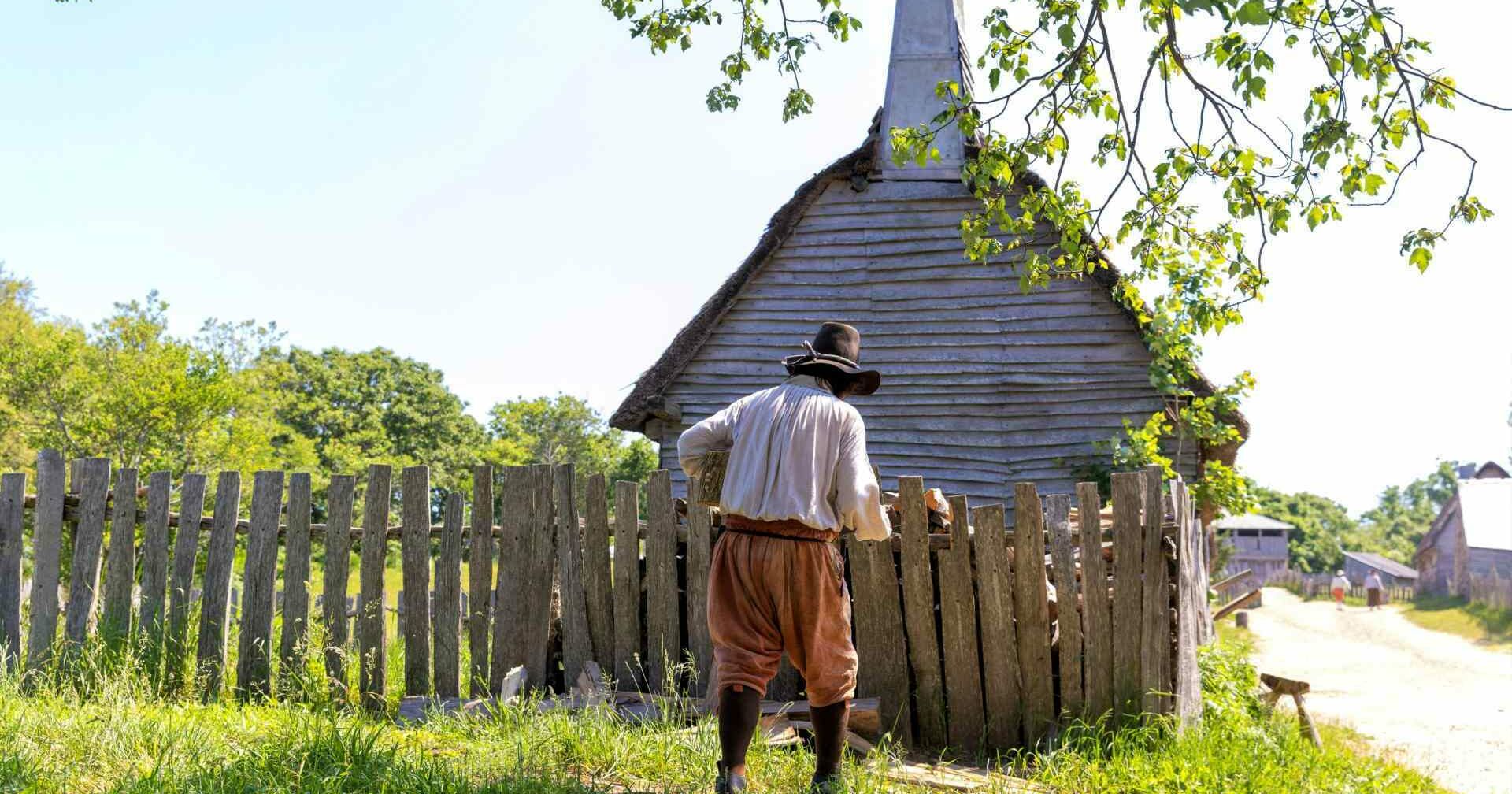 Although the materials and construction techniques of English and Wampanoag houses were different, their functions were the same. Dwellings were the hub of family life, providing protection from the elements as well as space for work, recreation and storage. They also offered shelter to guests or travelers and were, at times, used for family prayer or spiritual gatherings.

In the 1600s, both Wampanoag men and women took part in the building and making of a home. By working together, they knew the houses they built would be sturdy. Working together also made the people in the village a strong community.

The Wampanoag lived with a close spiritual connection to the land. They believed that the Creator made their People out of the Earth and the trees, with whom they shared the breath of Life. When they went to gather what they needed from the Earth to build their homes, they connected with Mother Earth and gave thanks for what they gathered.

A Wampanoag home was called a wetu. Families erected these dwellings at their coastal planting grounds and lived in them throughout the growing season. With the coming of cold weather, people returned to the protection of inland villages. Dwellings in the villages were either long, multi-family residences or smaller, round wetuash (plural of wetu). The multi-family dwellings could house 40-50 people – usually four or fewer related families. Within these houses, each nuclear family had its own fire. The houses were usually 50-60 feet long, but they could be as long as 100 feet.

In the spring, the Wampanoag gathered saplings (young trees) to build frames for the houses. The men prepared the saplings by peeling off their bark; the bark was then split andused to secure the frame of the house. The frame of a small house required about 40 saplings, while a large house might take up to 200.

Wide sheets of bark from large, older trees covered the frames of winter homes, while cattail mats covered those used during the warmer, planting months. With prayers of thanksgiving, the women gathered cattails from the swamps and marshes in late summer. They dried the reeds in the sun, and when they were ready, sewed the cattails into large, double-sided mats. When laid over the frame of the house, the mats channeled away the rain and kept the inside comfortable and dry.

For winter homes, the women also wove mats of bulrush, another kind of plant that came from the marshes. These mats took a longer time to weave and were often decorated and dyed red and black. They were hung inside the homes to keep them warm during the cold New England winters.

Wampanoag houses had a hole built into the very top of the house. This hole allowed the smoke of the indoor fire to escape. Sheets of bark above this hole kept the rain or snow from coming in. The family living there changed the position of this cover as the direction of the wind changed.

Wampanoag houses were built in a round shape because that is best to heat or cool a house evenly. This circular shape also represented many things in Creation that are circular, like the cycles of Life.

Once built, the houses belonged to the women. In the Wampanoag way, this is because they give birth to the children, who are the future of the People and must be protected and nurtured. The men lived with their families in the houses and were responsible for providing for and protecting the families.

Wampanoag People built their homes in this same way for thousands of years, but today live in modern homes. In the Patuxet Homesite at Plimoth Patuxet, Native staff members build homes in the traditional way. They have discovered that the homes are as comfortable as our modern homes.

Pilgrim Houses in the 1600s

Imagine that you have arrived in an unknown land after a long sea voyage. It is the middle of winter and bitterly cold. You are weak and tired from seasickness and need a warm house on dry land. You can have that house – if you build it first!

This is what the Pilgrims had to do when they sailed to New England on Mayflower in 1620. The colonists knew there were no English towns where they were going. They were prepared to build their own houses, but they hadn’t expected to have to build those houses in the middle of winter.

The colonists did not plan to arrive in Plymouth so late in the year. There were many delays. Speedwell, a leaky ship that was supposed to travel with Mayflower, had to be left in England, and the Pilgrims had a disagreement with the people who helped pay for the voyage. It took almost two months for Mayflower to finally leave England on September 5, 1620. As a result, Mayflower didn't arrive in Plymouth until December.

When the colonists arrived in Plymouth, they started to build their town right away. They had brought tools with them, and nails and iron hardware. The land provided everything else they needed. The men went to the woods and cut down trees. They used axes to chop and trim the trees from round to square. Then they fit these pieces together so that they became a frame. This gave shape and strength to the house.

The colonists had thatched roofs on their houses to keep out the sun, wind and rain. To make the roofs, they cut grasses and reeds from the marshes, and bundled them. Then they fastened them in layers to the roof. For the outside of the house, the colonists cut down trees and split the wood to make thin boards called clapboards. The clapboards were then nailed together over the frame of the house.

To make the walls of the house, the colonists built a framework of small sticks called wattle within the house frame. They took clay, earth and grasses and mixed them together with water to make a mortar called daub. They pushed the daub into the wattle until it filled the wall and made a smooth surface on the inside. This smooth surface resembles the plaster on the walls in some modern homes.

It usually took about two or three months to make a house, from framing it, to covering it with clapboards, to making the wattle and daub, and finally thatching the roof. Work on the finishing touches sometimes went on for a few more months even after the family began living in it.

When the houses were finished, they were not very large. Because the Pilgrims hoped to own their own land and build better houses in the future, the houses in Plymouth Colony in the 1620s were not as comfortable as the ones the Pilgrims left behind in England and Holland. Most of their houses only had one room. The colonists did their cooking, eating, and sleeping, as well as other work, in this room. The women cooked around a hearth, where small fires were lit. The fire from the hearth provided heat during the winter months and light at night. Candles and oil lamps were sometimes lit too. If there was a chimney, it was built of timber and clay and clapboards just like the rest of the house.

Most of the time, the houses were very dark. They had only a few small windows that closed with a wooden shutter. The floors were hard-packed earth. Some houses had a storage space above the first floor, called a loft. These spaces were used to store food and other goods, like dried herbs from the garden, bundles of corn from the fields, or even beds. They used ladders to climb up to the loft.

The English colonists had a very difficult time during that first winter as they were building their town. About half of the men, women and children who sailed on Mayflower died of sicknesses brought on by the cold and wet weather and by not having warm houses. By the next winter, however, they had built 11 new houses. The town began to grow, and the colonists finally had the shelter they needed.